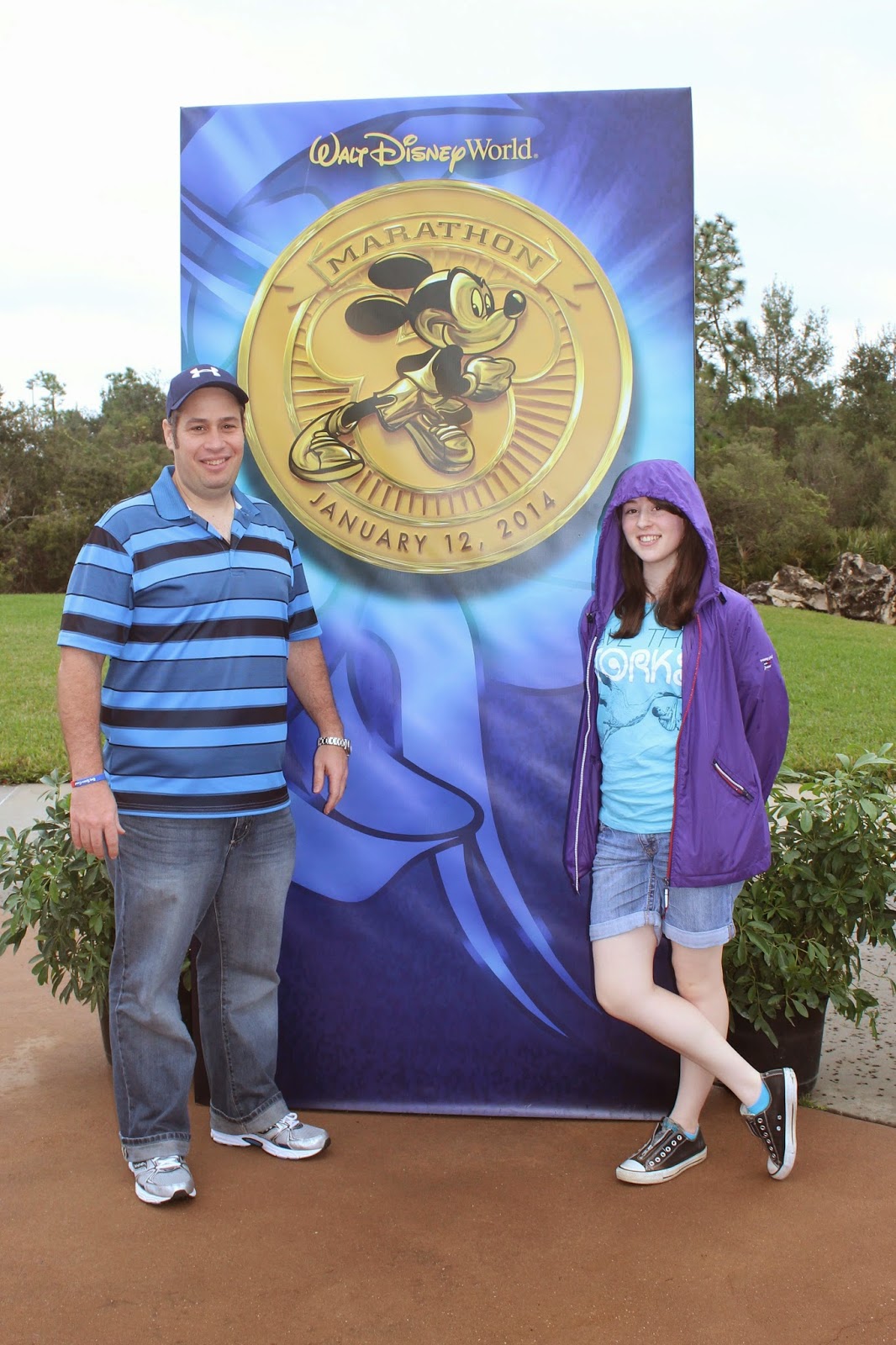 Marathon Weekend - Day 1 - Packet Pickup/Expo - Well, everything is new to Alexis and I, and even though we have done packet pick-ups at various races this year, including some good size half marathons, this experience was in my estimation typical of everything Disney. It was big and over the top and a bunch of fun for the entire family.  We spent about 3 hours in the expo and exercised every square foot. The weather was typical for Florida in the afternoon and the rain welcomed my childhood memories and offered to cool things down while at the same time raising humidity. 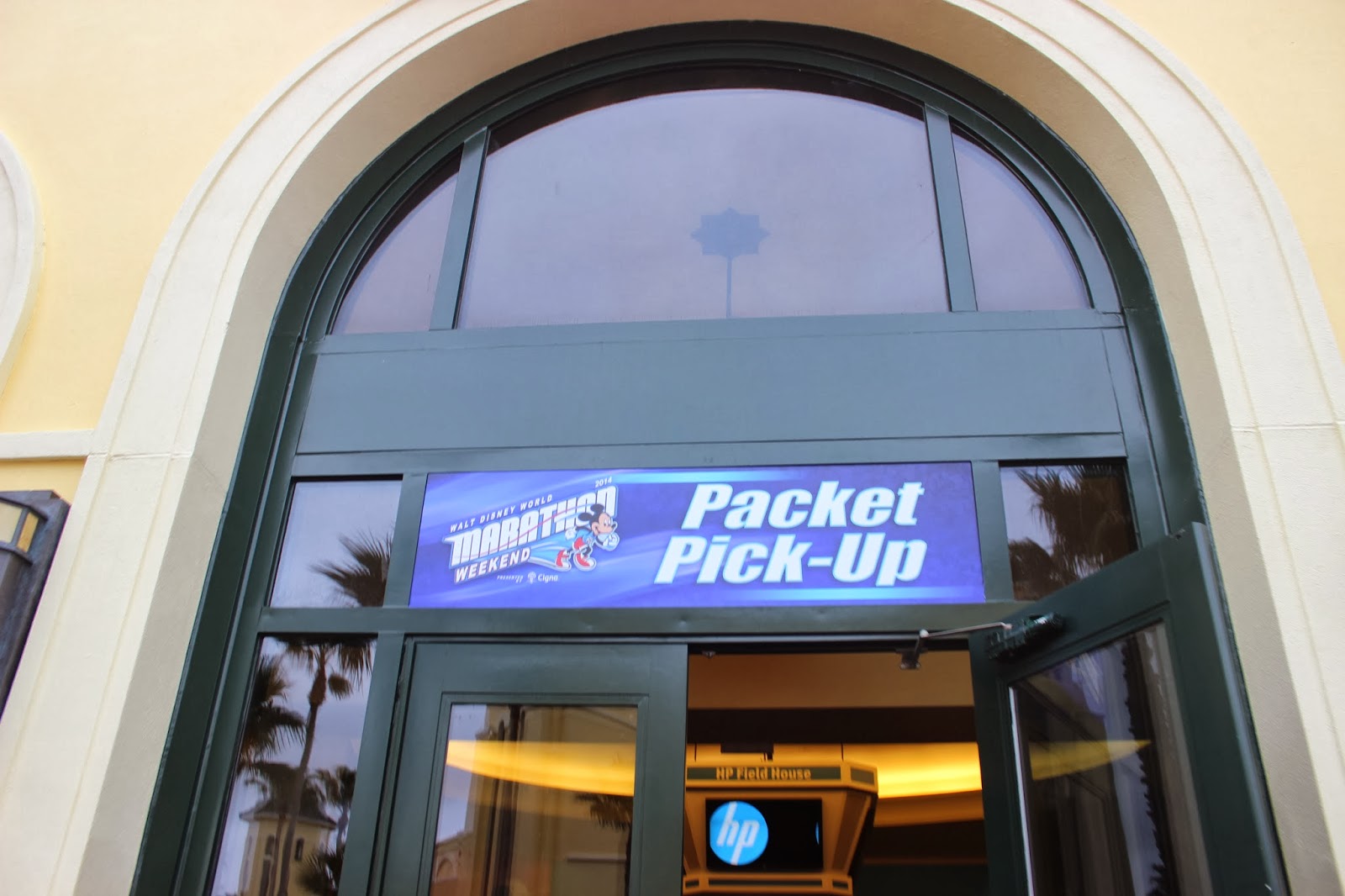 The first thing we did was packet pick-up. 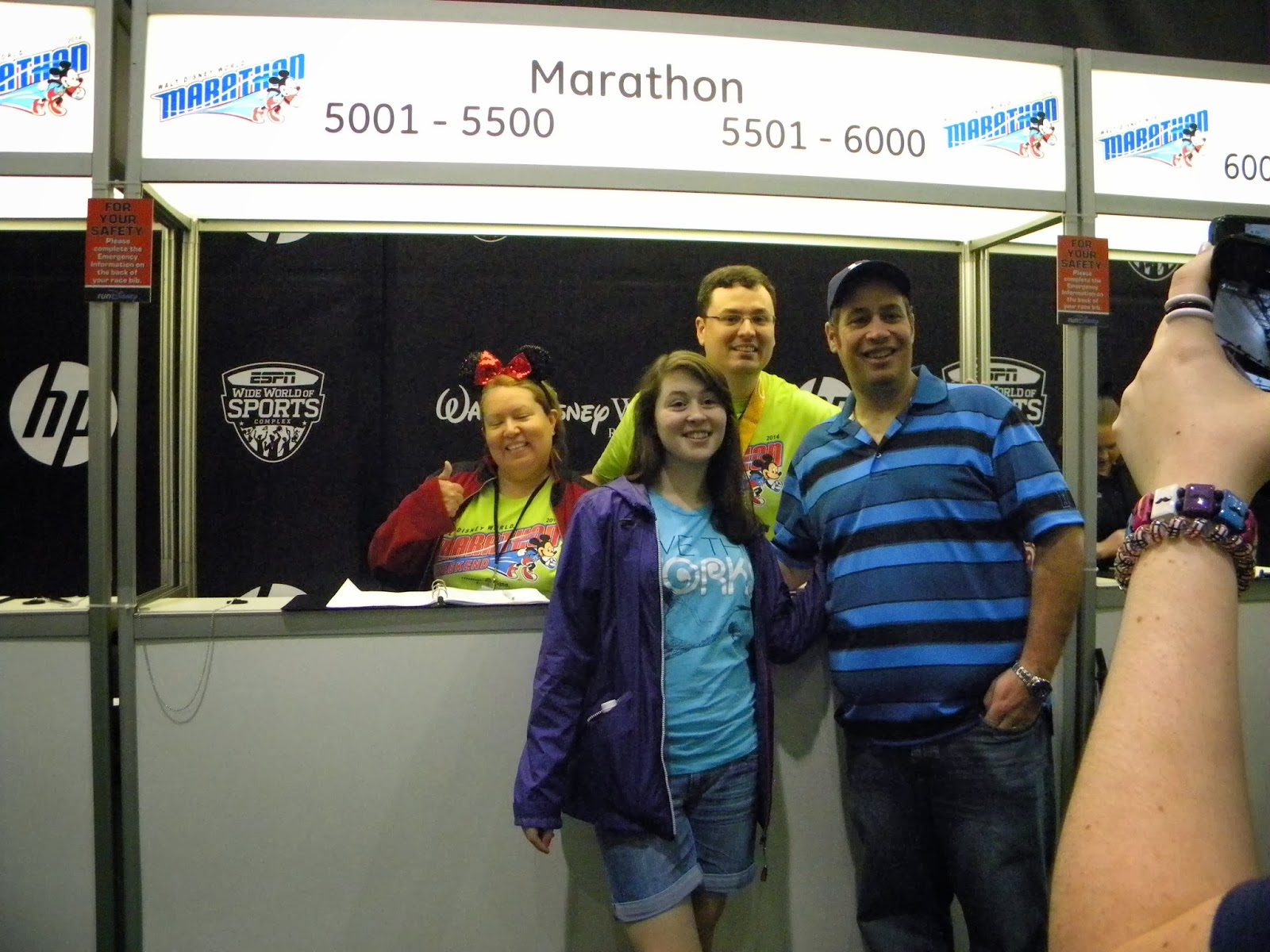 Upon arriving at our booth for Bib pick-up, we were pleasantly surprised to find our friends, Walter and Monica, from our FaceBook group called, "Run Space Coast" whom we met at a RSC meet-up during the Space Coast Marathon weekend, there volunteering for our particular corral. 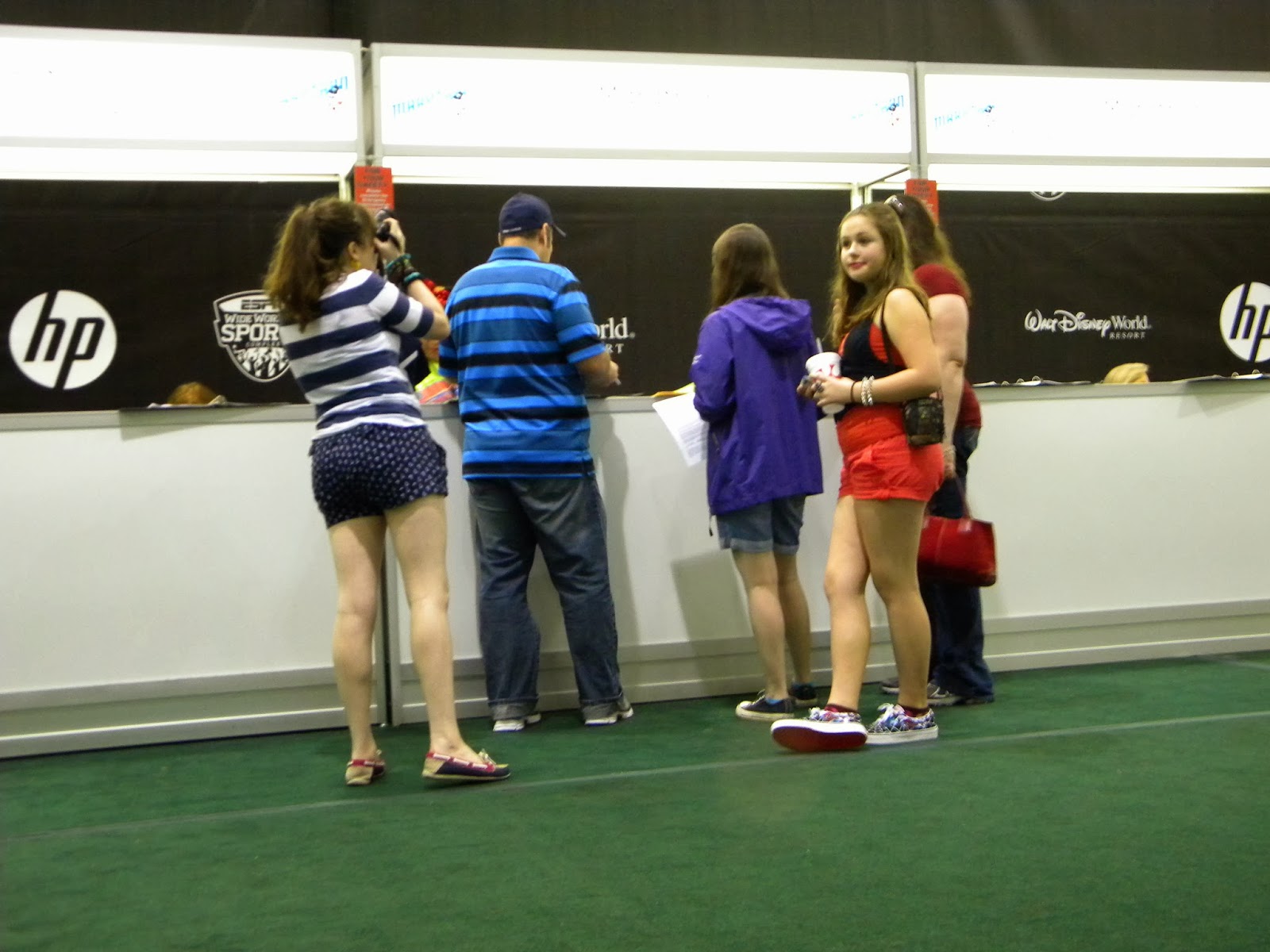 I'm guessing that 1:30 p.m. on a Thursday is an ideal time for packet pickup given that there were no lines and no waiting. 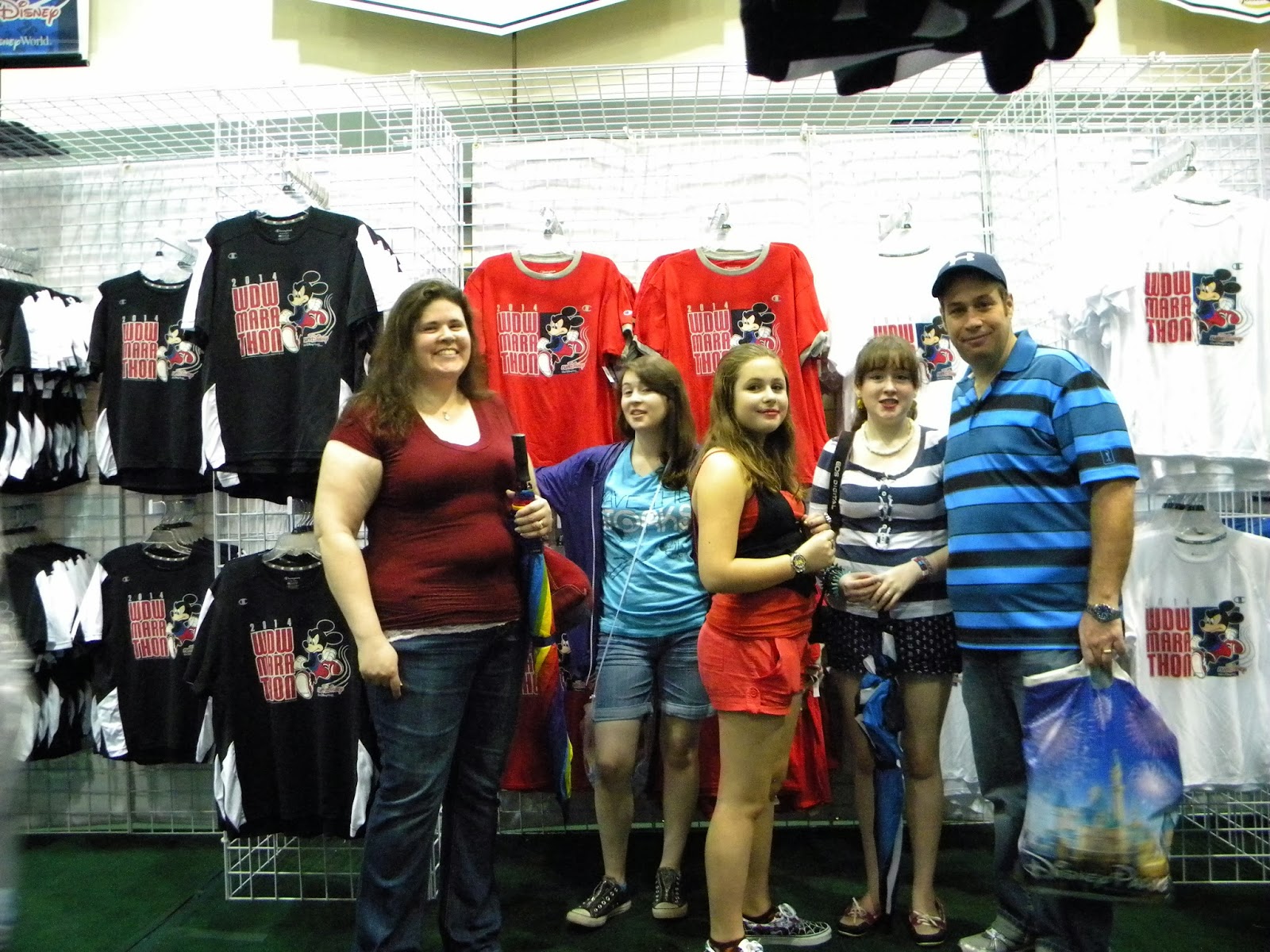 After packet pick-up we hit a small merchandise booth and pick-up a few of our key items including marathon magnets, a drinking glass and... 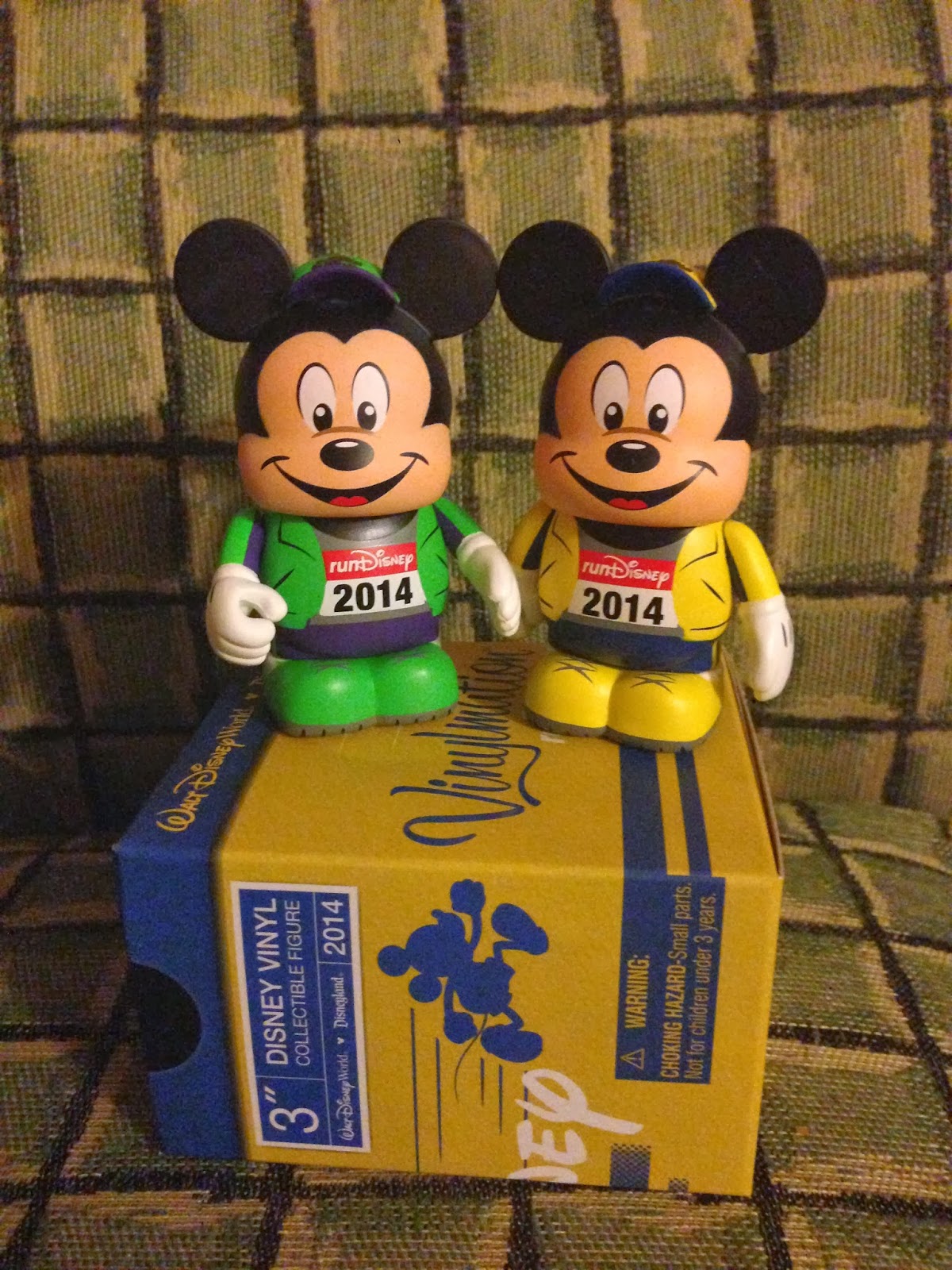 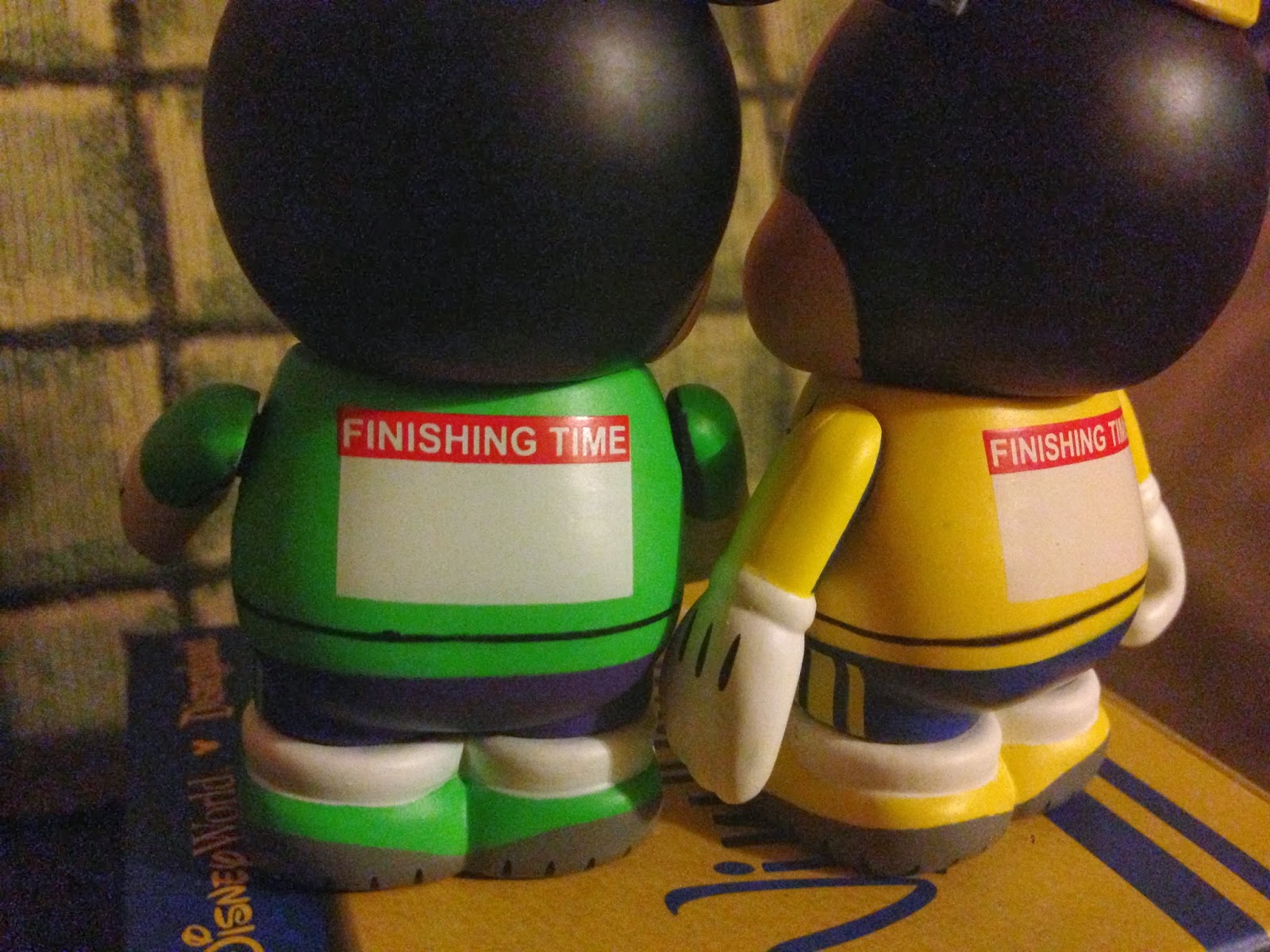 runDisney Vinylmation: We lucked out and got one of each color.  The boxes are sealed and the inner package is solid and non-see-through so this was some good luck.  I also didn't realize that the backs had a blank "finishing" time bib as well. 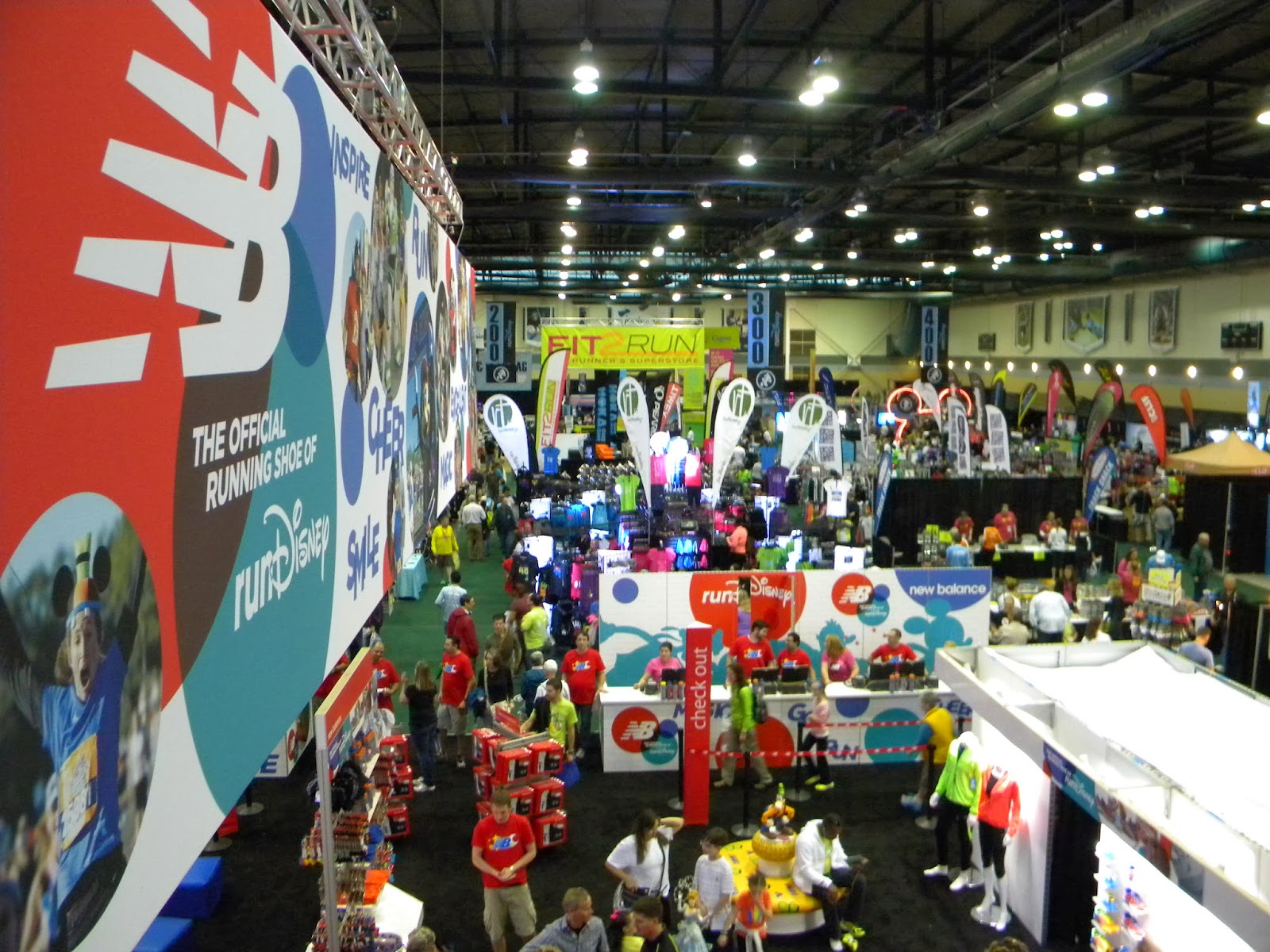 From there we went across to the Jostens Center; another expo center with "vendor" style booths typical of an event expo.  It really reminded me of my company's technology event, Citrix: Synergy.  The crowds were much bigger here but I imagine that it was still relatively light given the day and time.  I suspect that tomorrow and Saturday will be more packed.  The "big thing" during this event is the New Balance booth and the special edition runDisney NB shoes.  People waited in a "sign-up" line yesterday for a couple of hours and some did not get shoes until 5 hours after sign-up, and today's signs stated that they were not taking in any new registrations. 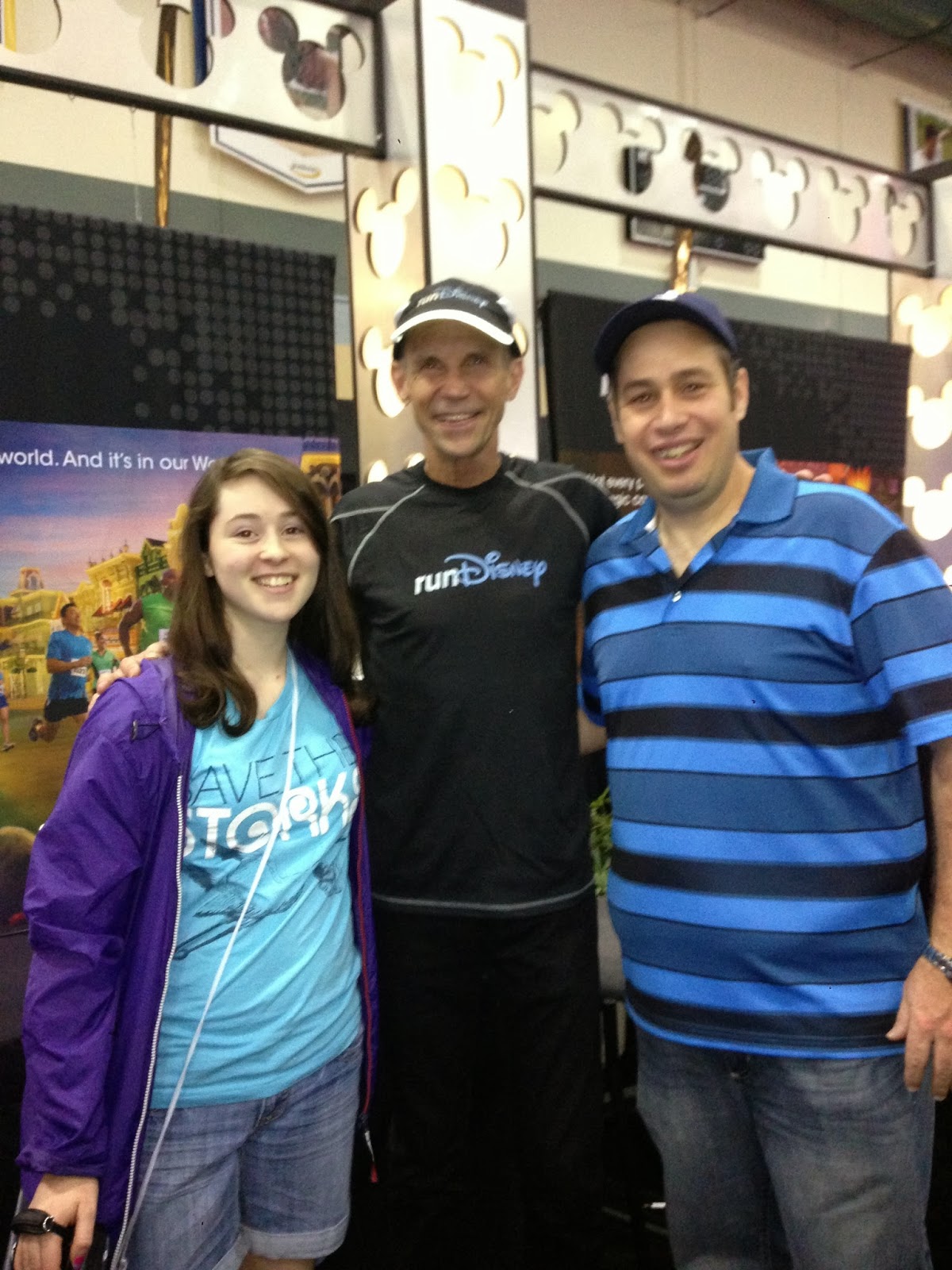 How about this?  We met up with Jeff Galloway for the second month in a row.  He still remembered us from the Space Coast Marathon where we presented him with our Run Space Coast silicone bracelet and got a book signing.  I was frustrated at Space Coast because we didn't get a candid shot with him, so I told Alexis that we were not going to miss an opportunity to do it this time around.  It's Jeff Galloway's running program that we utilized for our first marathon training and he is most known for promoting the run walk method.  We also got the opportunity to congratulate him on his Boston Qualifier.  Jeff is a gentle man, a great athlete for our sport and an all around swell guy. And, as my father noted, he's always accessible at events like this despite his celebrity. 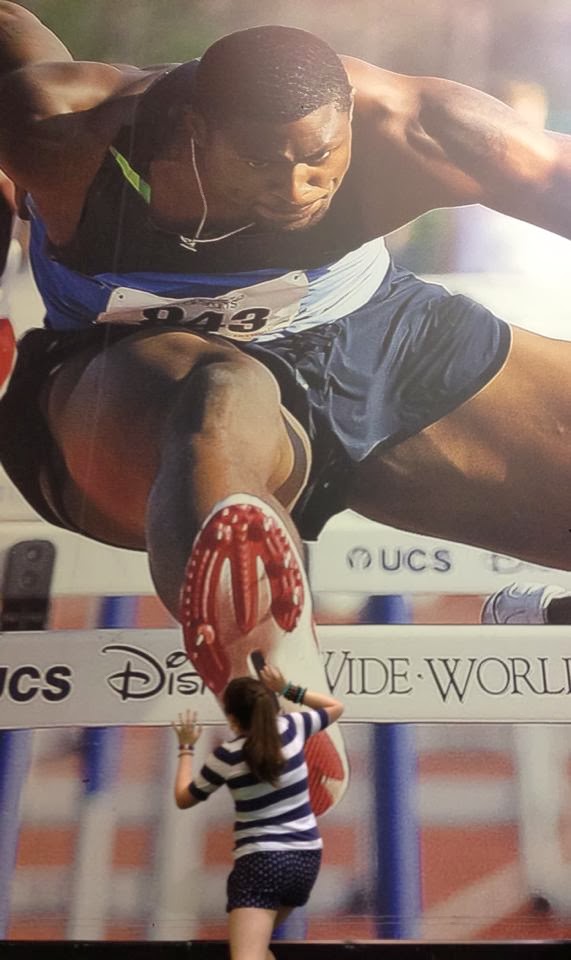 Did I mention how dangerous the expo was?  Here's Madisynne nearly getting squashed during one of the event demonstrations.  I'm guessing it was Goofy's idea to have hurdles on the marathon course. 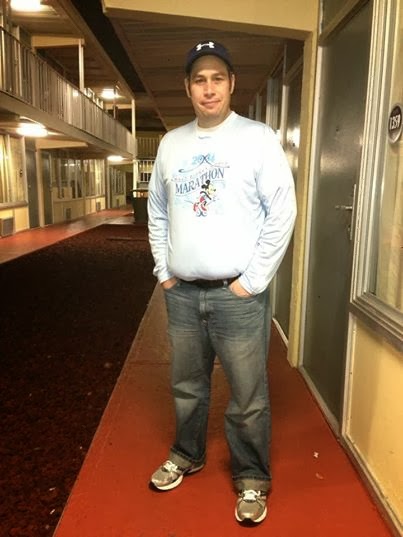 Lastly, I wanted to mention something that happened with the race shirt today.  When I picked up my race shirt, Debra had noticed that it looked rather big in comparison to my size.  The lady at the shirt table agreed and directed me to a "swamping" table.  I proceed to try on the X-Large (over my shirt) and it turned out to be a better fit.  I've been depressed over the last couple of weeks on my weight because the holidays had got the best of me and I gained 15 pounds.  Since just before the New Years, I got back on track for the marathon and lost back 5 lbs.  It felt good to share with these folks that I had lost 80 lbs over this last year and this swapping a shirt like this was a great feeling.  After all, the marathon goal was birthed from my Tminus110 effort.

Tomorrow, we head to our resort, Disney's Art of Animation, and settle in for much needed rest, carbo loading and hydration.  Dad will be joining us on Saturday.  Nerves are amping up but I'm having a blast!

I added more event photos on my FaceBook page at: Tminus110