[Week 8: Journey to WDW Marathon] Running with Gilligan and a Tminus110 Update... 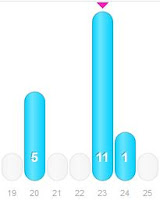 Well, with my ankle being a factor in my running, I took some days to rest the foot.  It went well for me to do it this way because we were on vacation on Sanibel Island, Florida for the week.  When I wasn't running, I was doing some other type of exercise including swimming in the pool and the beach, walking the beach and bike riding.  Some of the earlier days in the week, I spent some time skim-boarding with Joshua (read my previous blog and see my YouTube video on my skim-boarding bucket-list completion).  This was also the long run week, so the extra rest was good to support that effort. 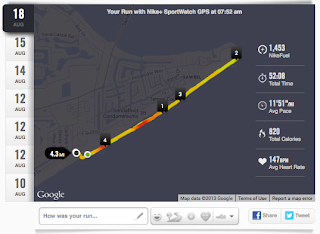 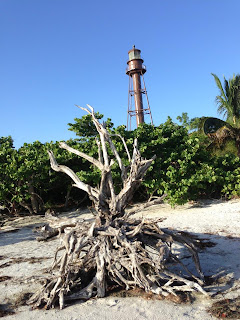 I posted this on Sunday in the previous blog post, but I did two of of these runs to the Sanibel light-house along the beach.  Alexis joined me on the second day.  We got out at 7:30 just as the sun was rising and I can say that it wasn't early enough since the sun became a factor.  Other factors that made the run tough were the sand (of course), the wind, humidity (duh, Florida on the beach) and the brutal beating of my already aching ankle. These struggles were a small price to pay for the beauty of this run.  I just love running along the ocean; the birds and other wild life, the people activity on the beach and unique running conditions made for an interesting run which seemed to virtually go quicker. 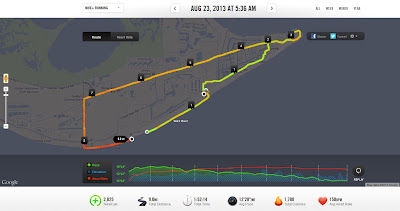 Alexis and I moved our long run to Friday since we would be traveling on Saturday.  We got up the earliest we have ever gotten up, much less during vacation, at 5:00 a.m. to begin our run at 5:30 a.m..  We decided that this would be the best to keep us out of the sun and make the run a little bit easier.  Just a little bit since the humidity index for that morning was 100%.  I didn't need the weather man to tell me that because just as I stepped out of the condo door my shirt was already getting wet and soaked within minutes of the run.  The moon provided the only "light" source for much of the path (my only complaint with Sanibel's trails is no lighting -- otherwise they are fantastic for walking, jogging and biking).  We began the run by jogging up to the light-house and out to the beach where the light house is located.  We then circled back and just followed the "main road", Periwinkle, down to Bailey's Market and hung a left.  We ran out to the beach and up the beach for a mile to complete the 9-mile long run distance. We walked another 2 miles making the total distance 11 miles. The beach at this end was a little softer than the end up by our condo so it was a little more challenging as evidenced by my pace dropping down drastically.

I also wanted to mention that this was the hardest long run that I've done due to some severe pain that I experienced starting at mile 4.  Let me explain.  At the start of the run, my thighs were a little sore from skim-boarding and my foot was also a little sore from the injury that I've been nursing.  As we approached a bridge around mile 4, I got scared by a bush and branch hanging through the bridge supports and rubbing my leg. I tensed up my muscles while continuing to run and all of a sudden, I was in some fairly bad pain.  The closest association I can give is muscle pain like felt after lifting weights and then continually pushing it. The pain in my thighs caused me to loose form and my ankle began to hurt at a greater level. I probably should have stopped running at this point but pushed through the pain in both locations.  My pace decreased quite a bit but I'm proud to have completed this run while pushing through the pain. 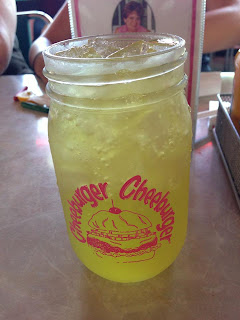 When this run was done, I was feeling pretty good about the amount of calories I had on the board for the day.  I had a little over 3500 calories (to maintain a weight-loss deficit for the day) and as a result of this, I decided to enjoy a "free" day of eating.  We enjoy going to a restaurant by the name of "Cheeburger Cheeburger".  I ordered a Mountain Dew (MD) for the first time in over a year.  Mountain Dew was my elixir when I was 314 lbs. and I was previously addicted to this stuff and drinking about 6 to 8 cans a day.  My regular breakfast was MD; no kidding. When I stopped drinking MD, I went into a fairly severe withdraw.  The withdraw was so bad that I have stayed away from drinking it purely on the fear that I would go through that again. Boy did a get an ear full from everyone (but Debra) at the table.  They thought I had back-slided and began my road back towards weight-gain.  After I flexed my authority as "Dad" and told everyone to take a chill pill (the kids just love the 80's talk), I explained that I was not backsliding and this was a one day type of thing.  Isn't is great to have a family support you this well?  I had two jars of Mountain Dew and I'm glad to say that it was not at all enjoyable.  I've been drinking water exclusively since being on Tminus110 and the MD was simply too sweet. I got a sugar rush but it made me sick to my stomach.  I also got a headache, presumably form the caffeine, shortly after drinking it.  In addition to the MD, I had fried mushrooms, fried pickles and onion rings.  Again, another shock to my body since I've stayed away from fried food since December.  The net result of my "free" day was sickness in my stomach and a firm conviction that I won't be doing that again any time soon.  What a great feeling! 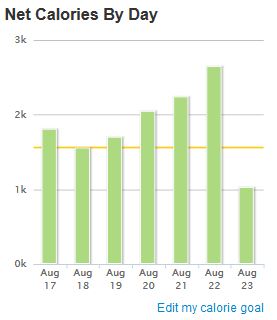 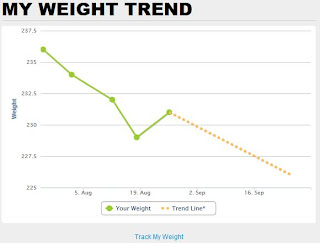 All and all, the whole week was relatively a "free" week.  I told myself I would enjoy vacation and not get legalistic about the calories or eating.  I did, however, record my calories as to not go crazy on the eating but I was free to enjoy things like cup cakes, key-lime pie and ice cream and other snacks I usually stay away from.  As you can see, I went above my calories each day for the week (except for Friday even with the fried food) and I did gain two pounds but that's not too bad.  I'll take it and get back to working hard again this coming week.

I did have a victory this week, even with the slight weight gain.  For the first time in years, I bought and wore a XL shirt and it fit well.  As a matter of fact, I bought a few shirts in celebration.  This really feels good and validates the hard work that I'm putting in.

Until next week, this is the Skipper saying, "until our next one hour tour",