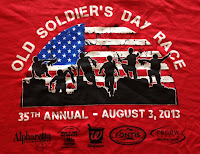 My wife, Debra, encouraged us to do a race this weekend.  She's got another round of chemo on Monday and thought this Old Soldier's Day 10K Road Race would be a fun event for us to attend.  It was nice that this event allowed for morning registration. "The Old Soldiers Day Parade began years ago as a tribute to veterans of the war between the states, but was discontinued after a few years. Twenty–eight years later, in 1952, a small group of men in Alpharetta re-dedicated Old Soldiers Day Parade in Alpharetta and started having a parade through downtown Alpharetta. Thanks to these few men and their belief in keeping this memorable tradition alive, this parade has become an annual celebration to all veterans of all wars.; this year marking 59 years." [ref. 1] In addition to the Parade they also hold a 5K/10K race in the a.m. before the parade event. 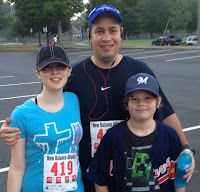 Gabrielle, who typically runs the races with Alexis and I, was over at a friends house so we took in the event without her.  Consequently, Madisynne was doing the same.  Alexis and I would run the race with Joshua and Debra as spectators.  As is typical with races, we were up early and fairly tired.  Good training for the typical early morning races that we will be taking on with the Half Marathons and Walt Disney World Marathon here soon. 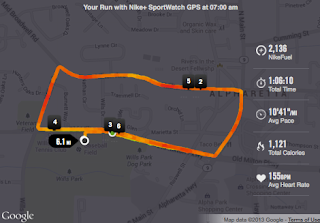 The race route was simple and started at a local municipal pool and park.  The route did this thing where it looped around a highway divider and then around a larger loop with a neighborhood in the center.  On the outside of the race route was the VFW, and some small businesses, including this BBQ restaurant called, Smoke Jack's, that was making my mouth water each time we went around.  The 5K and 10K route shared the same race route with the exception, of course, that we did the route twice. One of the things I'm still getting use to in Georgia are the rolling hills.  I have to chuckle every time these race organizers call their race, "flat".  There's nothing flat in Georgia, and while this race route wasn't a mountain pass, it wasn't flat either.  On the backside of the race route was a  fairly good incline and hit me good each time that we did it.  My BPM for comfortable running is around 145-150 and this hill got me up to 160 to 165 pushing my max. 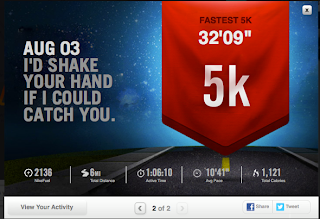 When it was all said and done, I managed to better my race times and better my per minute mile pace.  I cut my watch off short and missed the accolades from Nike+ for the 10K but no worries.  Just an achievement available for the next run. 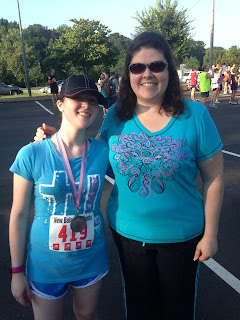 As an added bonus, Alexis managed to get 2nd place in her age division.  She accomplished this while running with her old man for the majority of the race.  I really enjoyed running with my daughter and appreciate the sacrifice that she made and not seriously competing for first place.  I believe she sees the bigger picture today but I also believe that she will definitely appreciate this in years to come.