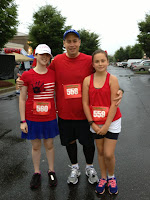 I ran this race with my lovely daughters; Gabrielle and Alexis. We also had some very good friends (friends that are as close as family); Robert and Jackie Moody running the 5K race which started at the same time. The 10K distance is the next natural progression for our Walt Disney World (WDW) Marathon training.  This was our first 10K which we were well prepared for since we've been doing this distance, or more, during our long run training on Saturday.  It was great having a patriotic theme on this July 4th to help celebrate our country's Independence while at the same time my own independence from unhealthy living.

On July 3rd, we were a bit concerned since the weather forecast for the 4th called for 100% rain.  On the good side, we knew that it would be cooler and likely make the run fast; even if we got soaked.  Thankfully, it drizzled a little but there was no rain for the run itself.  Like I predicted, the weather was also cooler at roughly the high 60's which is fantastic for July in Georgia.  It could have been much worse. 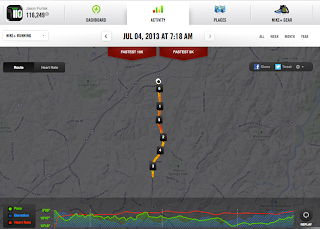 This run seemed real long.  Let me explain.  Even though we have run this distance for a few months now, this particular run went down a major road here in the area called, Peachtree Boulevard, and then circled back to the start.  Unfortunately, it's a major 4 lane divided roadway that is long and lacks interesting views.  Since you can see long stretches of this course (outside of the hills), it just makes for a real long run.  I much prefer courses that wind through neighborhood or city streets or even a long straight course through a wooded area would have been better.

Overall, I did very well on the race itself.  As you can see from the chart below, I kept an elevated heart-rate that pushed me just slightly.  At the start of the race, I felt real strong and actually had to slow my pace a bit since I was running under a 10 minute mile.  I hit a mini brick wall at mile 4 but that only lasted for a quarter of a mile or so.

When it was all said and done, I actually hit two records.  One for the 5K distance and another for the 10K distance.  To put this into perspective, my 10'51 pace beat my previous 10K record of 11'52.  I also did the race without walking or stopping. A very big day for me indeed.  It just felt good!

Undoubtedly Embarrassing: I have two cool stories to wrap things up.  Firstly, I found myself a bit embarrassed during this race.  You see, I bought a new set of clothes which were semi-patriotic in nature (red shirt, white and blue shorts).  I bought my typical size (2X) shorts as I have been doing but hadn't worn them yet.  As the race was progressing, I could feel that my shorts were slipping.  I even re-tightened the string a couple of times (while running).  As I approached the turn-around, I wasn't paying attention and all of sudden I found my shorts past the crest of my rear.  I quickly pulled them up and re-tied.  I imagine that my face was probably flush from the embarrassment.  If you watch the video, coming out soon, and look at a few photos on my FaceBook page ( http://www.facebook.com/tminus110 ) of the finish, you'll notice that I'm holding up my shorts.  I didn't want a repeat performance at the very crowded finish line. 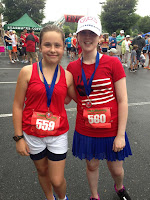 Proud father: Better than this, tho, was a great surprise that we received at the award ceremony.  For a little background; when I was running I took notice of the people that were passing on the return trip.  Since the 5K turned around much sooner than this, I had a fairly good view of the competition.  I first took notice that I was clearly not in the top three of my own age group, but then, I also noticed that there were no children the girls age either.  The girls were just behind me at the turn around so I knew that they were in contention to place.  We weren't going to wait for the 10K awards ceremony because of the finish line offense (explained below) but I had a feeling that the girls may place.  Imagine our surprise when we heard the third place time announced.  We knew that the girls had done a better time but you always have this doubt in your mind; like you have your times wrong or that you misunderstood.  The announcer called for Alexis, 2nd place, and proceeded to apologize a bit.  You see, Alexis and Gabrielle came across the finish line at the same time but in the registration order Gabrielle was first and Alexis second.  In reality, they tied and I was so thrilled as a father to see these wonderful girls of mine work hard and accomplish this award.  They truly are best friends on the course, keeping pace with each other, and it only seemed fitting that they would place like this.  As a side note, I should also mention that they have also been there right along with me and continue to train with me towards the goal of reaching the WDW Marathon.

Areas for improvement:  My only gripes with the management of the race were surrounding the finish of the race.  For some reason, they felt compelled to begin the 5K awards ceremony before the bulk of the 10K racers were finished.  If this wasn't bad enough, they situated the ceremony at the finish line so when I turned the corner for the finish line, I was disheartened that they were already starting the awards ceremony and then I was having to weave past folks standing in-front of the finish line.  I understand that you want to highlight your store but certainly you could have situated one or the other at a different location.  If an earlier awards ceremony was necessary as to not loose your 5K audience, then it may help to stagger the 10K and start a little earlier in the race.  Just a thought.

Overall, I was very pleased with the management of the race and would consider doing another in the future.

Here's a great video that Alexis did during the race: http://youtu.be/1UPN2_V2yIc