Alexis and I set out this morning with one goal; perform the week 4 long run on Jeff Galloway's Walt Disney World (WDW) Marathon training.  The schedule calls for a 5.5 mile walk/run but since we've been doing 10K or better distances (two weeks ago we did 8 miles), I decided that we would run 7 miles today.  The schedule would catch-up to us in two weeks.  We also set out with the goal of running from one end to the other on our local Big Creek Greenway.  Alexis decided to pace with me today since Gabrielle will be dropping out of our long runs.  Gabrielle will continue to do the runs during the week but the distances are getting too long for her young body.

I felt strong going into mile three and knew it was going to be a good morning. We hit the end of the Greenway at roughly mile 7, and I came to the realization that if we stopped at this point we would have to walk back at an average pace of about 18min/mile.  I was also tripping on a fairly serious running high.  I turned to Alexis and asked, "do you think you can do 10 miles?"  She chuckled at me and said, "yes."  I later asked why she chuckled, and she told me that my pace was fairly slow.  I believe it because at that point we were at a 11'11 pace and Alexis typically does under 10' on long runs.  I use my HRM to watch and support a comfortable heart-rate on my long distance runs.  Between 145 and 150 is sustainable on a non-stop run for me, but at this moment, that only gives me about an 11 minute mile.  Far slower than Alexis average mile pace. 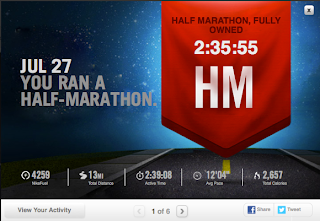 As we approached the 9 mile distance, I came to the realization that at 10 miles we would only be short of a half marathon distance by 3.1 miles.  Again, I turned to Alexis and asked if she could do the half marathon.  Again, she chuckled and said, "yes." At this point, I was honestly hoping that she was going to say no.  The runner's high was wearing off and I knew that the additional mileage would be a challenge.  As we hit mile 10, I slammed into a runner's withdrawal that was pretty serious.  I looked over at Alexis who was truckin' along and suggested that she not let me hold her back anymore.  Off she ran and there I was facing my demons... alone.  I have hit brick walls before but nothing like this.  My pace slowed down drastically and I was doing about  a 13min/mile but I finished.  When it was all said and done, I (we) had run my longest distance ever.  I still had a half a mile walk back and it sucked bad.  Every muscle in my body was weak and my mind was fuzzy.  You see, in my preparation this morning, I only preparred for 7 miles.  I didn't pack any electrolyte replenishment and my water ran out at mile 8.  I was physically and mentally wasted.  My beautiful daughter ran up to the parking lot and filled her water bottle and brought it back to me. Water never tasted so good! 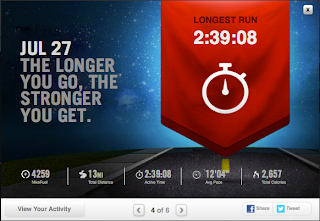 My total time on the Greenway for this run was 2:39 with a 12min/mile pace. I'm pleased I pushed through this difficult ending so that I would have the experience for future races.  In the parking lot, I shot the following video to mark this occasion: YouTube: Tminus110 video and shared on FaceBook.  I haven't been running long but I get all emotional when I hit records like this.  When I shot this video my mind was a bit fuzzy which I have never experienced before.  So much so, I made the mistake of saying a half marathon was 3.1 miles. In short, this is what I was trying to say:  This event marked my first ever 13.1 half marathon distance. I symbolically liken my struggles with weight-loss and running to my wife fighting cancer (in a feeble sort of way) but at the same time, I'm more impressed with her fight during this present chemo treatment cycle which is now half way done.  Lord willing, this will be the end.  I'm also thankful to my daughter Alexis, who has been training with me all along and motivating me everyday.  Same is true for Gabrielle who has joined us on most runs.  I'm also thankful to the rest of my family in ways that I can't adequately express in this blog.  This sentiment extends to my friends who are as close as family who often extend words of encouragement.  As a final word of thank you, I extend appreciation to those 84 family, friends and complete strangers who have "liked" Tminus110 and continue to encourage me along the way.