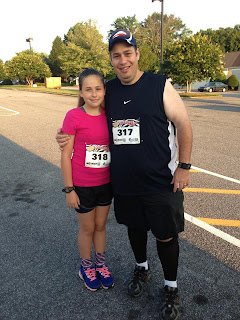 I have to be honest with you, I'm fighting some demons right now.  One of the biggest is this one of image.  I took a look at this picture from this past weekend's 5K and I'm feeling pretty bad about the way I look.  If you never met me before or knew of my previous high weight of 314 lbs., you would still think that I'm a fairly fat guy, right?  I've told myself all of those self help things like "it's all about the health, don't worry about your image" and "look at how far you have come and look at how good you feel".  I guess where I'm struggling is that I've been working hard at this since last November and I'm still a big guy, and I'm still hitting many of the road blocks that comes with weight.  By way of example, I went into a running store a couple of weeks ago to buy a fitness belt to store personal items and carry a water bottle.  It was pretty embarrassing that even after the salesman tried to expand the belt it didn't fit me. Not even close. I came to the realization that running stores don't cater to fat people.  After all, fat people don't run, right? As another example, one of the perks of running road races is the shirt that comes with the race, unfortunately, despite getting the largest size that they have offered (2X), these shirts still don't fit me.  I'm now starting a collection of shirts that I'm hoping to fit into one day, but in the meantime, it's a constant reminder that I'm still fat. 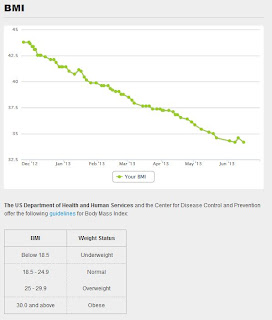 I just want to be "overweight" on the BMI scale. Even though I've made great headway, I'm still obese.  I may not be in the morbidly obese category any more but I'm still obese and that's depressing against the backdrop of all of the hard work. I know that BMI isn't a real good measuring stick, however, fat is fat and I'm still there.

I don't share this with folks very often but I struggle with depression and these feelings of self image get strong sometimes and add to my weight-loss struggle.  I'm just tired of being fat and can't loose weight fast enough.  I do worry, however, if I don't get this image thing under control that I won't ever be satisfied, whether at 244 or 195, and that's a scary notion.

On the positive side, I went into the office on Monday and Tuesday after being out for several months (I'm fortunate to work for a mobile work-styles company that allows full time remote working) and it was a great pleasure seeing people's reaction.  I've never had people say to me, "Wow! You look good!  I've had complements before but one guy was so loud that it drew attention.  It's a good feeling when this happens but I can't live on this response as it will eventually go away, and later if I don't get this response even though I know that I've lost weight, I fear that I might get more depressed and stop my progress.  It did feel good though!

Does anyone else that struggles with weight have these same feelings?  I would love to hear your thoughts.

Email ThisBlogThis!Share to TwitterShare to FacebookShare to Pinterest
Labels: Weight-loss