Several months after starting my weight-loss journey, I felt inclined to get back into jogging.  I was a recreational jogger through high school ( a few 5Ks here and there but nothing too serious) and into my military years (One day I'll tell you the story of jogging on an aircraft carrier...not as easy as you might think), but as I gained weight and my fitness dropped, so did my jogging. Before getting to the fitness level where I thought I could run, I tested a 1 mile run, and while my body was clearly not ready to run, I was pleasantly surprised that I could in-fact run at my present fitness level. Based on some research I had performed, I came to learn about the Couch-to-5k training program.  I felt that if I used this program it would ease me into running with less injury and get my heavy body up to shape to run.  I was right on both counts.

During the Couch-to-5k program I discovered the adventure of running in various locations.  One such location that exemplifies adventure is Fort Wilderness.  Our family booked a vacation to camp at Fort Wilderness and when we arrived I was pleasantly surprised to find out that they had a jogging route and literature to go along.  Not only did we use these paths for jogging but we also decided to walk during much of our activities.  According to Disney's Fort Wilderness website, "Enjoy a 2.5-mile-long pathway through Resort grounds. For a quick jaunt or to extend your workout, explore the 0.75-mile shaded fitness trail and bike path that connects Disney's Wilderness Lodge and Disney’s Fort Wilderness Resort & Campground"-- Online Map -- . 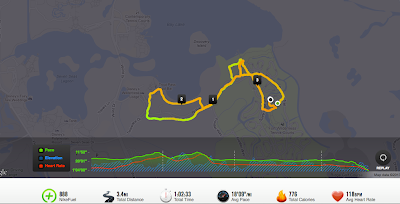 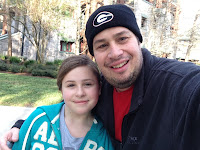 My daughter Gabrielle joined me on this run and we did it during the early morning hours when it was still rather cool outside (it was March at the time).  If you look closely, you will notice that we did not follow the path exactly.  As we approached the beach at the Fort Wilderness Lodge, we saw a path that followed the lake.  We took this path and later realized that it was the horse path since we were having to dodge the manure.  The lake is pretty but the manure is not.  Skip the path less traveled (by humans on foot) and stay on the recommended trail. The path mainly consists of cement throughout the campground and the transition over to the lodge but there are a few spots on softer ground; such as the location at the horse barn area.  Overall, there's plenty of running paths throughout the campground, even if you don't stick to the prescribed path in the running guide; and not all that technical.  What's great about this campground jogging (I use this term lightly since this is the Lexus of campgrounds, and in Disney style, there's few like it) is that one can get adventurous within the confines of the campground without feeling like they've wondered too far off the beaten path.  My only regret is that I did not take very many pictures.  A few selfies with Gabrielle and a video.  My immediate goal was a 5K, and at that point, I was happy to complete that and did not consider at the time that I would start blogging my progress.  Who would have thought that a few months later I would be contemplating a marathon?  I'm sure we'll be back and I'll take a more comprehensive survey at that time.

Here's a little video that I did thinking that I was going to combine this with a one week update.  No one week update so just a lame video: http://youtu.be/e5vUBxrSOoY

What's not lame is this report at: "Running at Disney (RAD)" entitled, "Wilderness Lodge & Fort Wilderness Exercise Trail"- http://runningatdisney.com/2012/02/05/wilderness-lodge-fort-wilderness-exercise-trail/ that includes such things aa photos and an account of the run.  I'm sure you'll enjoy this blog post so check it out.

It won't come as a surprise to those in the jogging community, but Disney has a well thought out running program at the various Disney resorts (not that Jogging was their first thought in design of course). 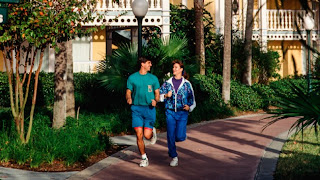 If you have a Disney Resort blog summary that you would like to share, please respond in the comments below.
Thanks for dropping by and make sure to check out my Facebook page at: https://www.facebook.com/tminus110